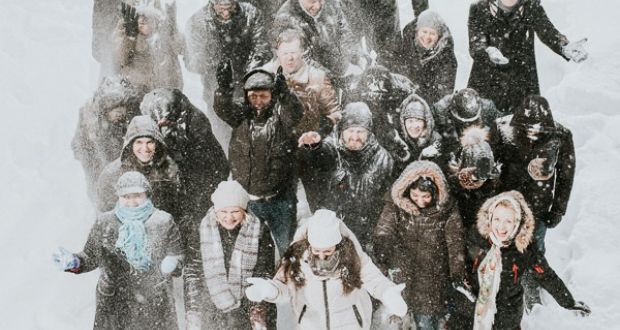 The Estonian Philharmonic Chamber Choir: hoping for a warm reception in Dublin

As the whole world must have heard by now, we Irish are officially the most oppressed people ever, a fact recognised by even northern unionists, via the sarcastic acronym Mope.

Our record is usually rounded off at 800 years, although not everyone agrees that the oppression has stopped yet. A few dedicated enthusiasts still reserve the right to feel downtrodden whenever, for example, a certain actress named Saoirse (meaning poignantly “Freedom”) is described anywhere as “British”.

But as this coming year will remind us, Ireland does not have a monopoly on long centuries of subjugation by powerful neighbours. The Baltic republics can give us a run for our money, at least. In fact it’s likely that when Estoniacelebrates the centenary of its first declaration of independence next month, the phrase “700 years of oppression” will feature in the coverage.

That is the term used there – sometimes ironically, as in our case – for the period of foreign domination that stretched from the 1220s, when Danes overran the territory, to 1918, when Estonians took advantage of the Russian Revolution to declare independence from their latest overlords.

Consciously or not, the declaration of February 24th, 1918, even had certain resonances with a document read out on the steps of Dublin’s GPO two years earlier.

“In the course of centuries never have the Estonian people lost their desire for independence,” it began: “From generation to generation have they kept alive the hidden hope that in spite of enslavement and oppression by hostile invaders the time will come to Estonia when [a quotation from the national epic poem followed here]. Now that time has arrived.”

It didn’t prove quite so simple in practice. A German occupation followed, then a war of independence that coincided with the Irish one.

And even when freedom was won, it lasted barely 20 years before the second World War swept it away again. Thus the 700 years of oppression was well on the way to being 800, before another revolution was required to escape the collapsing Soviet Union.

This is where any parallels between Ireland and Estonia end, although events of the 1980s in the latter country also remind me of GK Chesterton’s verse about an earlier period of Irish history, viz: “The great Gaels of Ireland/Are the men that God made mad/For all their wars are merry/And all their songs are sad.”

Well, I’m not sure about the prevailing mood of latter-day Estonian songs. But happy or sad, at least some were also political. And they became more so when sung by massed crowds in the 1980s, not just in Estonia but in neighbouring Latvia and Lithuania too.

Hence the remarkable events known as the Singing Revolution, by which all three republics regained independence without resort to violence.

In Estonia, the phenomenon had roots going back to the mid-19th century. Established in 1869 by a patriotic poet, the Estonian Song Festival has since become one of the world’s largest amateur choral gatherings. Now reprised every five years, the festival features between 20,000 and 30,000 singers, performing in front of 100,000 people, meaning that almost 10 per cent of the country’s population takes part.

Where the 1869 edition marked an upsurge of patriotism – the “Estonian National Awakening” – the related events of 1988 were a reawakening. Old protest songs were sung again, with new ones added, and there were local variations in Latvia and Lithuania. Among other remarkable things, the movement inspired the “Baltic Way” of August 23rd, 1989, when two million people formed a human chain across the three republics.

The Soviet Union resisted and there was a Bloody Sunday in Lithuania, with 14 protesters killed. But the USSR could not stop the music. By 1991, communist rule of the Baltic states had been sung into history.

When Estonians celebrate the milestone of that first declaration of independence, therefore, they will have more than the usual excuse for having some of the commemorations in concert halls. So it is that, this coming January 31st, the National Concert Hall in Dublin will host those latter-day inheritors of their country’s extraordinary singing tradition: the Estonian Philharmonic Chamber Choir.

Praised as “pure, powerful, and unabashedly spiritual” by the Washington Post, the group will not be presenting an overtly political programme (full details at NCH.ie). Their specialities are Gregorian chant, baroque, and the music of their country’s greatest living composer, Arvo Pärt.

Even so, it promises to be an emotional night, and not just for Estonians, but for people from any other small, long-oppressed European nations who might be in the audience.