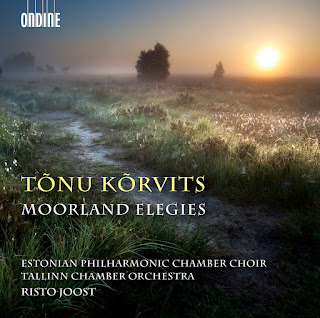 Music that turns out as, or even more evocative than its title suggests leaves us transported, if all is right. That ends up how I feel about Tonu Korvits’s Moorland Elegies (2015) (Ondine 1306-2). It is a nine-part work for mixed choir and string orchestra. The texts are poems by Emily Bronte. The Estonian Philharmonic Chamber Choir and the Tallinn Chamber Orchestra under Risto Joost give to the score all the potentially moody ambience that is inherent in its beautiful tone painting contents. It has some similarities with the ambiances of fellow Estonian Arvo Part. It partakes even more in a haunting after-modern impressionism so that it readily serves as a contemporary model of what can be done.

Korvits himself says of the work that it is a journey “into the darkest, most mysterious corners  of loneliness to where one doesn’t dare peek twice.” Composers are apt perhaps to wax hyperbolic about what a work purports to do. In this case though, it is almost an understatement. The eerie poetic revery builds sonic worlds that have the capacity to poetically transfix, and they do so without release. It is the sort of work that silence or any everyday sound you hear after the work has ended takes on the coloration of the music the remains in the active imagination. Moorland Elegies colors your world so thoroughly that for some time afterwards nothing seems to return to the crisp mundane everydayness that you normally operate within.

What can be said musically can rarely be said so well that there is no mistaking its content. Moorland Elegies does this in magical terms, where that which is concrete in its building blocks transforms into an ethereal presence and an ever-liquidian flow that refers back to long stretches of vegetative leveling, wind that states its disregard of human presence, and the totality of being utterly alone within such a world.

To say it eschews a romantic sentimentality is the case. It instead gives forth with an “after all, this is what remains” kind of dynamic finality. There is the mysterious ineffable quality of Ives’ “The Unanswered Question.” This work gives us the unquestionable answer. That in the end is the historically positioned subject at a point where all the hurly burly of past experience disappears into a haze of not-self.

There is singularity of purpose and rare totality of tonal imagery to be heard on this recording. To listen is to enter a world where we matter by disconnecting from the world outside of the desolate moor-scape and immersing ourselves fully in its facticity.

Nothing quite has this titanically fragile moodiness. It is a world that is post-pastoral, way beyond the nostalgia for a lost world, but rather a lost-in-the-world solitude. All is what it is, and that is regretful in its beauty. There is more I could say. The main thing is how the music stuns by an uncanny analogic juxtiposition of subject-text and tonal refractory magic.