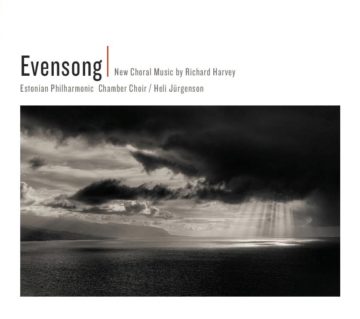 Esteemed British composer and multi-instrumentalist, Richard Harvey returns with a sublime album of new choral works: ‘Evensong’, scheduled to be released on November 1st 2019 on Altus Records.  The album was recorded in Estonia with the Estonian Philharmonic Chamber Choir, conducted by Heli Jürgenson.  Additional performances feature The Latvia Radio Choir conducted by Sigvards Kļava and the strings of the Hungarian Film Orchestra.

‘Evensong’ features ten new compositions for mixed choir, some of which are also scored for string orchestra, organ and various soloists.  The recordings were completed in January 2019 in the awe-inspiring acoustic of St Nicholas Church Museum in the Estonian capital, Tallinn and were produced by Richard Harvey and Alex Lamy with additional production by Michael Pärt and Bill Connor.  In most cases, the texts were sourced from traditional works and also showcase additional libretti from Canadian poet Archibald Lampman (1861-1899) and Welsh poet George Herbert (1593-1633).

‘Evensong’ follows Richard Harvey’s previous critically acclaimed choral album, ‘Kyrie’, released in 2017 which featured the classic ‘Kyrie for the Magdalene’ which was the highlight of the soundtrack to Ron Howard’s blockbuster film ‘The Da Vinci Code’, starring Tom Hanks.  ‘Evensong’ is bound to resonate deeply with lovers of quintessentially British choral music as Richard Harvey’s skills in this genre never fail to delight, with his beautiful melodic shaping and unique voicings, coupled with harmonic twists that please and surprise in equal measure.

Amy Haworth is featured as the soprano soloist both on ‘The Call’ and also on the title track ‘Evensong’ together with notable instrumental contributions from Christopher O’Neal on oboe and cor anglais and even Richard Harvey himself, playing psaltery, recorder and syrinx.

Hailing from a musical family, whose father was a composer and woodwind player, Richard Harvey studied at the Royal College of Music and was an enthusiastic member of the British Youth Symphony Orchestra.  He formed his first group in the early 1970s, the progressive rock band ‘Gryphon’, famous both for its unique sound-world that successfully melded English folk with medieval and Renaissance elements and for touring regularly with ‘Yes’ both in the UK and the USA.

Harvey is renowned for the breadth and depth of his work as a composer, which includes the famous guitar concerto ‘Concerto Antico’, written for leading guitarist John Williams and for his large-scale choral works.  His most recent release was ‘Scénarios, a collection of miniatures for solo piano, performed by John Lenehan.  Moving seamlessly between the classical world and his work for film and TV, Richard Harvey has conducted top symphony orchestras around the world and has performed internationally as a sought-after soloist.  He has also recorded for and collaborated with very many significant contemporary composers and musicians, including Sir Paul McCartney, Stanley Myers, John Williams and Hans Zimmer and even on a multimedia project with artist Ralph Steadman.  Richard Harvey and Elvis Costello won a joint BAFTA for their work on Alan Beasdale’s political drama ‘GBH’ and Richard Harvey is also the recipient of an animation industry Annie Award for his score for the animated feature ‘The Little Prince’ on which he collaborated once again with his long-term musical partner and friend, Hans Zimmer.  He has been nominated for four Ivor Novello Awards.

Richard Harvey is fascinated by musical instruments and owns a large collection of over 800 different instruments from around the world.  He has founded a music charity called the MAE Foundation which introduces musical teaching and participation to children in long-term refugee camp situations.

Of ‘Evensong’, Richard Harvey commented: “I have long since been inspired by the choirs of the Baltic region.  What is unique about the Estonian Philharmonic Chamber Choir – apart from its obvious class as an ensemble – is the special acoustic of the venue where it makes many of its recordings.  Partially destroyed by Soviet bombing in World War Two, the St Nicolas’ Church Museum in Tallinn was painstakingly restored as a working monument to peace.  The Choir creates transcendental soundscapes in this venerable atmosphere where they record at night and it’s always magical and inspiring.  It’s a true privilege having the Choir carry my message.  The texts for these songs have very special meaning for me.  Lampman was a true worshipper of nature and also a great craftsman of words.  I had been wanting to set George Herbert poems for some time now and transmute the visual architecture of his poems to the sonic world.  ‘The Altar’ very much follows the structure as the great poet left it on the printed page and with the use of harp as accompaniment to Herbert’s text, I felt very much connected to my Welsh heritage”.