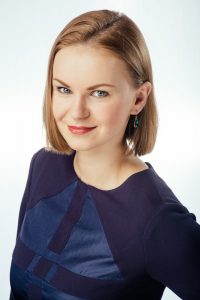 Ülle Abner (soprano) began her musical journey with violin studies at Nõmme Music School in Tallinn, and progressed onto piano at the music school in Pärnu. During her studies at the Ülejõe School in Pärnu she sang in the choir there and attended singing classes under Urve Tauts. She continued her studies in conducting at the Heino Eller Music School in Tartu under Lauri Breede. While at school, she conducted her first mixed choir ‘Mäluasutuste segakoor MaSk’, and took part in concerts in the Vanemuine Concert Hall, which was a great source of inspiration.

In 2010 Ülle was awarded the II prize in a conducting competition between three schools. In the same year she began her studies at the Estonian Academy of Music and Theatre under the guidance of Ants Soots. A year later she established the “Sireen” (‘Siren’) chamber choir together with Tiiu Sinipalu. Additionally, Ülle has been a chief conductor of the Crede chamber choir, and also conducted a male ensemble from the Tallinn University of Technology and has worked as a chorus master for the Voces Musicales chamber choir. Since 2016 she has been working as an assistant conductor for the Engineers’ Male Choir. Ülle has sung both as a choir and solo singer in many choirs, including the European Choral Academy in Germany, the Estonian Concert Choir, and the Voces Musicales chamber choir etc.

Ülle started to sing at the age of 2, following in the footsteps of her older brothers and sisters. As far as she remembers, she has always dreamed of becoming a singer. Although life has presented her with a multitude of interesting opportunities and challenges in terms of professions (including eyelash stylist, barista, and a trainer of baristas), she made her choice to become a musician, which finally led her to the Estonian Philharmonic Chamber Choir.