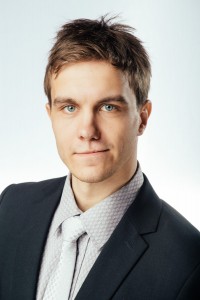 Sander Sokk (tenor) was born in Tartu, the second biggest city in Estonia. His career as a musician started at the Heino Eller Tartu Music School, where he graduated from the classical singing department in 2011 under Karmen Puis. He continued studying at the Estonian Academy of Music and Theatre, eventually receiving a bachelor’s degree, and is now studying for a master’s degree under the guidance of Juhan Tralla.

Sander made his debut for the Estonian Philharmonic Chamber Choir in 2012 at a concert performance of Arvo Pärt’s ‘Passio’ in Nargenfestival. This was followed by the performances of Verdi’s ‘Rigoletto’ and Mozart’s ‘Don Giovanni’ at the Aix-en-Provence Festival in France. Since 2014 he has been a full member of the EPCC.

Sander tends to reminisce over the many challenging concerts he has taken part in with the EPCC, for instance, the performances of ‘Nativity Words’ on the Veljo Tormis’s music, produced by Peeter Jalakas and Tõnu Kaljuste and the programme of French music ‘Les Angélus’ were particularly demanding. One of his favourites is Tõnu Kõrvits’s ‘Moorland Elegies’, which premiered in 2015 in cooperation with the Tallinn Chamber Orchestra and the conductor Risto Joost. In this composition he is especially fascinated with lyrical melodies, diverse harmonic colours, witty arrangement and deep lyrics of this work.

Sander is a composer himself and has written several pieces for the choir, for piano and chamber ensembles, and one Symphonic Poem in four parts. His compositions are available online at https://www.youtube.com/user/leuphoniemusic and https://soundcloud.com/leuphonie.

In addition to singing Sander loves sports, often playing basketball and going swimming. He has a special fondness for taking photographs of the exceptional venues and concerts, in order to have enduring memories of the choir’s adventures and feats.