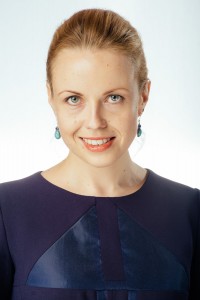 Karoliina Kriis (soprano) was born and grew up in Tartu. She received her choral education at the Karlova School in Tartu, and it was here where she started gaining experience with singing solo under teachers like Lembit Soone and Mall Heinmaa. As Karoliina developed her musical taste, she found solfeggio to be her favourite subject. She continued to study at the Heino Eller Music School under Viviane Kallaste, and later on at the Estonian Academy of Music and Theatre, which she graduated from in 2008 under Ivo Kuusk.
During the final years of her tuition at the music academy, she took part in some concert projects organised by the Estonian Philharmonic Chamber Choir, but it wasn’t until 2007 that she became a full member of the choir.

Karoliina has had roles in the performances put on by the music academy’s opera studio, as well as putting herself forward at any opportunity to sing solos and smaller roles in other EPCC performances, some of them under her favourite conductor Marc Minkowski in the performances of Grieg’s ’Peer Gynt’ and Mozart’s ’Idomeneo’.

Karoliina enjoys a variety of music, from rock and roll to chamber and opera music. She has the EPCC to thank for the special, heart-warming feeling she gets when listening to music by Arvo Pärt, Galina Grigorjeva and Tõnu Kõrvits.

Karoliina’s greatest passion is travelling, collecting memories and experiencing new cultures. She also has a hand for crafts and tries to create beautiful items through sewing, pottery, carving, and designing jewellery. You can see a glint in her eye when she speaks and analyses the themes of criminal psychology, an ardent follower of numerous books, documentaries and TV shows related to the topic.