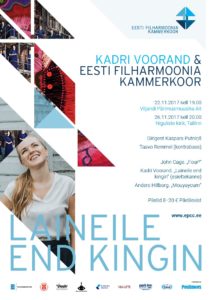 An extraordinary performance brings together renowned Estonian jazz musicians and the EPCC!
„Four 2“ (1990), written by the most famous American avant-garde composer John Cage, belongs to the so-called Number Pieces, where the title of the work indicates the number of performers. Another composition “Mouyayoum” by the well-known contemporary Swedish composer Anders Hillborg mesmerizes audience with its musical language which seems to be stunningly difficult and simple at the same time. Both composers are representing unusual "instrumental" writing for choir, both are contemplating the space and time.

And more surprises to come – new premiere by the shining star of Estonian jazz music Kadri Voorand! ’Giving Myself to the Sea’ is written for the Estonian Philharmonic Chamber Chor, solo voice, piano and double bass. It tells an ancient story about an inevitable force of fate and love. A sailor, his three daughters, villagers, fairies and many other characters will bring the listeners to the world known from the Estonian tradition.

Broadcast by the Estonian Classic Radio: 26.11 at Niguliste Church, Tallinn.