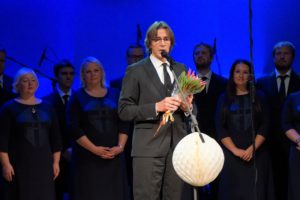 On October 1st, the chief conductor of the Estonian Philharmonic Chamber Choir Kaspars Putniņš was given the Annual Award of the Cultural Endowment of Estonia for the devoted activity in the music life of Estonia. The ceremony took place at the International Music Day Gala in the concert hall of the Estonian Academy of Music and Theatre.

Kaspars Putniņš has been an artistic director and chief conductor of the Estonian Philharmonic Chamber Choir since the season 2014/2015. During these years he has conducted different programmes, where the main focus has been Estonian music. Whilst Kaspars Putniņš work encompasses a wide range of choral repertoire from Renaissance polyphony to works of the Romantic period, his foremost goal has always been that of promoting contemporary outstanding choral music and commitioning new works from Estonian composers.

Among his recordings the CD with the Estonian Philharmonic Chamber Choir „Schnittke – Psalms of Repentance. Pärt – Magnificat & Nunc dimittis” (BIS) won Gramophone Award in 2018. This year, in April Kaspars Putniņš, was bestowed the Order of the Cross of Terra Mariana, 4th Class, by the Estonian President.