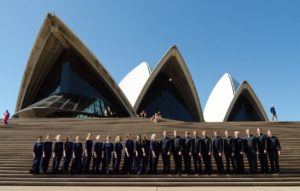 Unforeseen public transport delays on the afternoon of the ‘Arvo Pärt and JS Bach’ concert saw us running across the forecourt of the Sydney Opera House in 30 degree heat, up the sweeping staircase to the very top of the Concert Hall to find our seats before the doors were. Hearts pounding, minds racing, we were greeted with Pärt’s Da Pacem Domine and, instantly, we knew that the world we had come from, so busy, so hot, was a world away from the experience that was about to envelope us. We knew to expect vocal mastery from the world-renowned, multiple Grammy award-winning Estonian Philharmonic Chamber choir. Their use throughout the performance of iPads, driven by ‘Scoremusic.me’ software developed by an Estonian start-up company, confirmed their place at the technological forefront of modern choral music. We knew too that the music of Arvo Pãrt, the most-performed living composer has been described as prayerful and meditative but we weren’t prepared for the synergistic interpretative brilliance this choir brought to the music to create a powerful sense of soothing, reverent peace.

The message from the conductor of the renowned Australian Chamber Orchestra, Richard Tognetti, with arms raised between the works in each half was clear: the performance was to be played without a break. We were there to witness an integrated performance of the works of two great composers, separated in time by three centuries. The change in style of J.S. Bach’s Komm Jesu Komm BWV229, characterised by soaring melodies from both choir and orchestra that filled every moment with glorious sound, made it clear that the arrangement of the program would give us much to think about.

The program moved to the orchestra’s interpretation of Pärt’s orchestral adaptation of his work Summa, haunting and soulful, evoking a deceptive sense of simplicity of form that stilled the heart. The hall was then filled with Bach’s Singet den Herrn ein neues Lied, BWV22 motets, broad sweeping orchestra and clear voices culminating in energetic joyous song of praise. The contrast was palpable and exciting. The unrestrained applause at the end of the first half seemed a natural response to this energy as the interval brought us abruptly back to our modern world, enjoying conversations with friends in the backdrop of expansive views of a bustling Sydney harbour in the foyer of the Opera House.

The history of Estonia’s struggle for independence is painfully well known in the Estonian diaspora and the environment in which much of Pärt’s early music was written has had far-reaching impact on our lives. Pärt’s courage in developing his own style of music, so heavily steeped in Christian orthodox chant, is particularly moving and often perhaps not fully appreciated by those outside the diaspora. Yet the minimalist style of the opening piece in the second half of the concert, Pärt’s Toccata from Collage on B-A-C-H, evident in the simplicity of the soaring melodies combined with the unmistakable rhythms that identify Bach’s music, seemed to create a bridge between these two worlds, a way for us all to be touched by the Pärt experience. A short period of silence was heralded by two more Bach motets, again evoking feelings of joy in the music, even though the text spoke of death, once more filling every moment with sound, majestic and brilliant. The juxtaposition of these Pärt and Bach compositions provided an opportunity to think more deeply about the timeless relationship between suffering and one’s experience of the sublime.

The theme of sacred music and honouring of the dead was continued in the performance of In Paradisum written by the Ukranian-born Estonian composer Galina Grigorjeva. The apparent tension in the music resolved to create a feeling of spiritual homecoming, heavenly paradise. The ensuing period of silence was filled by Peter Sculthorpe’s work “Djilile”, extending the theme of the spiritual power of chant to the Australian context as this work, arranged by the composer specifically for the Australian Chamber Orchestra, was inspired by an aboriginal chant from Arnhem land. This piece evoked the harsh and haunting landscape of the Australian outback, the source of a deep spiritual relationship between its people and the land, not unlike that between Estonia and its people.

Then it was time for the climax of the afternoon’s program, Pärt’s “Berliner Messe”. The gravitas of the opening plea for mercy echoed the depth of spirituality of the preceding Djilile. As the mass progressed, there seemed to be an openness in the music, space to contemplate and reflect on Pärt’s unique treatment of the centuries-old structure of the Roman Catholic Mass. The credo rose to great heights, emphasising to us the possibility that expressions of faith, without certainty, may be a source of strength in uncertain times. But the crowning achievement of this program of music was not evident until the last few phrases of the performance. The essence of the afternoon’s experience was captured by the Agnus Dei: the returning theme from where Pärt’s Mass for a plea for mercy began, framed within engaging music that began with supplication but ended with a vision of tranquility and peace in our world, a possibility of redemption so ebulliently celebrated by the motets of Bach and aptly concluded with the open spaces, tranquility and calm of Arvo Pärt. This was a triumph for one of the great choirs of our time, the Estonian Philharmonic Chamber Choir, and for Tognetti’s Australian Chamber Orchestra.