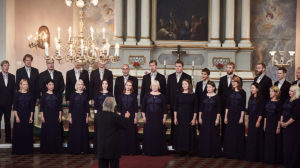 On September 30, the EPCC under Tõnu Kaljuste will give a concert with Arvo Pärt’s “Kanon pokajanen” at the festival Spiegel im Spiegel  in Mosow. The concert is dedicated to the 100th anniversary of the Estonian Republic.

Kanon pokajanen (1997) is based on the canon of repentance, which already appears in the earliest Church Slavonic manuscripts. Arvo Pärt discovered that text many years ago, when he became involved in the tradition of the Russian Orthodox Church and it made a profound impression on him. It took over two years to compose the Kanon pokajanen. Arvo Pärt has said that he had tried to use language as a point of departure. „I wanted the word to be able to find its own sound, to draw its own melodic line. The resulting music is entirely immersed in the particular character of Church Slavonic, a language used exclusively in ecclesiastical texts.”

The concert is produced by the Spiegel im Spiegel.