Kaija Saariaho has done it again: her opera Innocence, premiered in Aix-en-Provence, proved to be a masterpiece and was enthusiastically received by the audience and critics alike. Its distressing subject, a school shooting, was merely the starting point for a multi-faceted exploration of humanity and trauma. Text, music and drama came together in a rich and emotional blend. Is this the best opera that Saariaho has ever written?

In her previous operas, Kaija Saariaho showed herself at her best in creating lyrical and meditative musical moods, albeit contemporary drama did rear its head in Adriana Mater. Innocence, on the other hand, is a completely new kind of departure for her in terms of plurality, fast tempo and tension.

To be sure, the content dictated the style to some extent – one could scarcely imagine many subjects more horrifying than a school shooting. Saariaho has reported that she and librettist Sofi Oksanen were aiming for thriller-like intensity with shifting time levels and a mixture of nine languages delivered in a variety of speaking and singing styles.

For myself, the main concern in anticipation of the performance was how Saariaho would cope with such a style. Yet the premiere at the Aix-en-Provence festival proved just how adaptable she is: the opera was completely gripping, at times employing techniques usually seen in horror films. Another new departure for Saariaho was the use of spoken lines, and accordingly some of the cast were stage actors rather than singers.

Innocence is Saariaho’s most complex opera to date. Never before has she pushed the boundaries of human vocal expression quite so hard. Remarkably, though, she has created a continuum where all these various elements blend together. Still, there is much that is familiar from her earlier operas in the score: lyrical wind motifs, a lucid string sound and the golden shimmer of harp, percussion and celesta. The unseen choir builds a link between the orchestra and the soloists and contributes to the soundscape with its magical hums and vocalises.

THE MANY SIDES OF HUMAN NATURE

Innocence is complicated and by no means an easy work, but this is in fact its strength. It makes no moral judgment and does not depict good and evil in terms of black and white. The shooter himself does not appear in the libretto, but in this production he is present as a non-speaking character in flashbacks showing events leading up to the shooting. However, the focus is firmly on the victims, survivors and family members, particularly on their memories and how they have been able to move on with their lives, or not.

The framework event in the present time is the wedding of the school shooter’s brother, which is a useful device for bringing together an international group of people. Flashbacks to the shooting, which happened ten years earlier, alternate with scenes in the present time. The genius of Oksanen’s libretto is in how natural the shifts between times are and how she keeps revealing new and surprising facets of the characters.

Many of the characters seen had a part to play in the events leading up to the shooting. The only wholly innocent person is the Romanian bride (the vocally brilliant Lilian Farahani), from whom the family trauma has been concealed; it is revealed to her in the course of the action, though. The title of the opera probably refers to her, but also to the lost innocence of everyone else.

Oksanen treats her characters with empathy, as does Saariaho with her musical material. Perhaps the most exciting appearance was that of Vilma Jää, who has a background in folk singing, as Markéta, the only victim of the shooter who is a singing character in the opera. Her vocal technique certainly made listeners sit up and pay attention. Saariaho wrote music for her that is very different from everything else, undulating in simple pentatonic motifs that at times escalate into yelps reminiscent of joiking or cattle calls.

Jää sings with a straight tone, projecting an impression of innocence and of otherness, even though – spoiler alert – Markéta proves to have been not quite such an angel as the story unfolds.

Markéta’s mother, Tereza, performed by mezzosoprano Magdalena Kožená, finds herself as a waitress at the wedding and is unable to conceal her bitterness at the efforts of the groom’s family to move on with their lives. Kožená harnesses her brilliant mezzosoprano voice to embody her character’s conflicting emotions and gives the most trauma-ridden performance of all.

The Mother-in-Law is played by Sandrine Piau, who like Kožená is a star in todays’ operatic firmament. Her brilliant and dreamily lilting coloratura is reminiscent of Berg’s Lulu. It perfectly reflects the character’s state of mind, where crushing pain clashes with her love for her shooter son.

Tuomas Pursio as the Father-in-Law is plagued by guilt. Pursio captured the sensitivity and insecurity of the character underneath the paternal exterior. Markus Nykänen as the Groom gave a fine musical performance with his tenor voice, including the character’s emotional collapse. Saariaho wrote dizzying falsetto passages for both these male roles, and both Pursio and Nykänen executed these with aplomb. The Priest, played by Jukka Rasilainen, seeks to provide a soothing balm but seems himself to be stuck in a slough of disappointment and self-recrimination. The role is a bit too low for Rasilainen, but in the middle register the familiar steel in his voice could be heard. 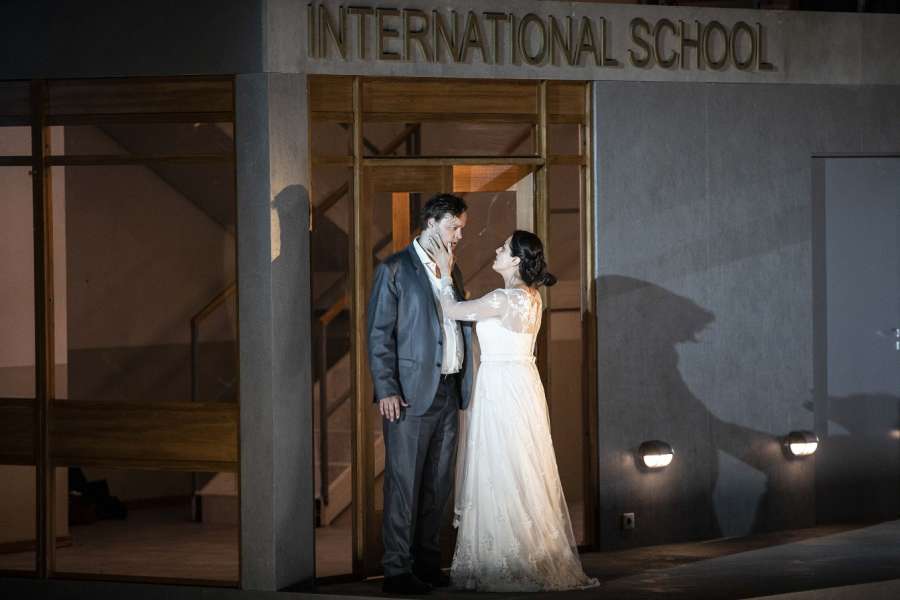 The theatrical nature of Innocence stems from Sofi Oksanen’s text, which also propels the musical action. The use of multiple languages serves as a psychological intensifier: they are used for privately expressed thoughts, as opposed to the English that the characters use to communicate with each other.

The sense of drama extends to the music too. For example, in Scene 9 of the libretto we find the instruction: “Gunshots. The flurry of gunshots transforms into phone ringtones and sirens.” Saariaho executes this in her own way. She paces the tension and intensity with utter clarity: when characters speak, the orchestra thins out, and the soundscape rings with echoes of the tragedy.

Then the orchestra fires up again, sometimes escalating to dramatic outbursts. There is also a melancholy, mournful note established in contrabassoon solos at the beginning, and the work also ends in a rather sombre mood.

The actors in the cast play the students and one teacher involved in the shooting. They were all amplified on stage. Their speech ranged from hysterical to reflective, from precisely notated rhythmic speech to free speaking. Simon Kluth as Anton gave a textbook example of clear enunciation and a powerful stage presence. Lucy Shelton as the Teacher came the closest to Sprechgesang, with an unreally wandering part that occupied some strange middle ground between cabaret and Schönberg’s Pierrot Lunaire.

Director Simon Stone is known for his modern realism and for his deft use of the revolving stage, as I have previously noted with admiration in Medea in Salzburg and in Die Tote Stadt in Munich, for example. This design was absolutely perfect for Innocence. Stone’s precisely crafted montages were utterly cinematic, and he was equally detailed in his characterisations. This was certainly not an opera where people just stand and sing.

There were a lot of surprises in the staging, with some unduly obscure references, but I liked that Stone was so adamant about realism. He was able to work with the capabilities of both actors and singers yet also create a narrative that brought them all together.

The school building by set designer Chole Lamford was in almost constant motion on the revolve, revealing new angles and settings. Small, intimate spaces such as a toilet or a utility closet offered excellent settings for revealing secrets, while the wedding venue was transformed as if by magic into the school foyer or a classroom, as needed. The costumes by Mel Page, both festive and everyday, were stylish and functional, and the lighting created by James Farncombe made an important contribution to setting the mood in the revolving spaces.

Conductor Susanna Mälkki was the linchpin of the production. She precisely dissected the layers and colours of the orchestral texture, giving them space to have their full impact. The music breathed in a natural rhythm throughout. We have Mälkki’s clarity to thank for the fact that the opera did not seem nearly as complex as it actually is and that the dramaturgical flow was understandable, unflagging and unbroken.

The London Symphony Orchestra lent a touch of luxury with its wonderful sound. I was reminded multiple times in the course of the evening that a large part of the work of this orchestra is playing film music. The Estonian Philharmonic Chamber Choir made a reliably solid contribution to the whole.

A recording of the performance has been available on the Arte website, but I strongly recommend experiencing this production live, because then the simultaneity and the magic of the scene changes are far more impressive, and the cast of characters comes together in a single, multi-faceted image.

From here, the production will go on to the Finnish National Opera and Ballet (October 2022), the Dutch National Opera, the Royal Opera House in London and the San Francisco Opera. These are the co-commissioning parties for the opera, and in addition to them the production is known to be on its way to the Metropolitan Opera in New York.