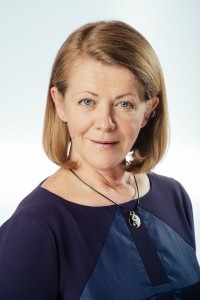 Marianne Pärna (alto) comes from a small village named Loksa quite close to Tallinn. She graduated in singing from the Georg Ots Music School, Tallinn, under Linda Toomsalu. More recently, she has continued her education with Professor Allan Vurma. During her studies Marianne sang in the Estonian Radio Choir and has also sung for eight years in the Estonian National Opera Choir.

In 2005 she was invited to audition for the Estonian Philharmonic Chamber Choir, subsequently becoming a full member.

Marianne says that the experience of performing at Nieuwe Kerk in Amsterdam in 2005, when the EPCC performed Arvo Pärt’s ‘Kanon pokajanen’ (under Tõnu Kaljuste) for the first time, was exceptional and left such a huge impression on her. It is something she will never forget.

In her spare time Marianne enjoys reading and walking, but most of all she loves keeping very active by dancing and doing gymnastics.