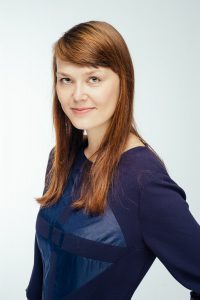 Maarja Helstein (alto) comes from a small village called Kambja in southern Estonia. After graduating from the local school there, she had a strong desire to go on to study choir conducting at the Heino Eller Music School in Tartu, where she become a student of Triin Koch. She continued her studies at the Estonian Academy of Music and Theatre with Ants Soots. After graduating in 2013, Maarja began her singing tuition at the Georg Ots Music School in Tallinn, and later at the Estonian Academy of Music and Theatre for a bachelor’s degree under the guidance of Heli Veskus.

Maarja thoroughly enjoys both singing and conducting in the choir. Since 2013 she has been the conductor of the Noorus mixed choir, and since 2016 the assistant conductor of the Virumaa Boys’ Choir.

Maarja has sung in the chamber choirs of Tartu University, Collegium Musicale, and the Lübeck Choir Academy. She has been a soloist in Pergolesi’s ‘Magnificat’, Vivaldi’s ‘Gloria’, Mozart’s Mass Brevis and Saint-Saëns’s ‘Christmas Oratorio’.

Maarja was jubilant and proud about being offered the opportunity to join the EPCC. She didn’t need much convincing and swiftly joined in 2016. Maarja also believes that the people who attend hobby choirs don’t fully realise the joys of choir singing as a ‘real profession’. For Maarja this is the perfect job; although not always plain sailing, she considers being in a choir more exciting and captivating than being in any other profession.

In her spare time Maarja tends not to listen to a lot of music because it encompassed much of her life at school and now at work. However, sometimes she is in the mood for some Kate Bush, Queen or Vaiko Eplik, the latter a noted Estonian musician.

Maarja doesn’t usually have favourites in classical music, but she strongly feels a spiritual connection to the music by Ester Mägi, a notorious Estonian composer. She admires the femininity and tender lyrics mixed with intensity and dramatics in Mägi’s music.