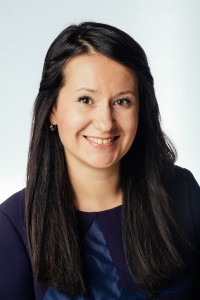 Anna has attended many master classes by a number of the finest singers and instructors, such as Kaia Urb, Matti Pelo, Manuela Formichella, Irina Lungu, Paolo di Napoli, Margareta Brandt and Wilma Vernocchi. She has sung in the Estonian Concert Choir, Vox Clamantis, and together with Aule Urb and Zenja Hovstepjan in the Metsikud Mezzod (Savage Mezzos) ensemble.
Anna innovatively created a concert series named ‘An Evening Fairy Tale’, where as a soloist she has enthusiastically performed theatrical pieces of Russian and Estonian music from the 20th and 21st century.

Anna is certain she became a singer of the Estonian Philharmonic Chamber Choir by complete chance. To her surprise, she was invited to audition in 2011 and subsequently became a full member of the EPCC after showcasing her terrific gift for singing. She feels incredibly lucky because she has always felt an urge to sing diverse music and travel around the world performing at prestigious venues, which is exactly what the EPCC has offered her.

In her spare time Anna keenly participates in the thrilling psychological game named ‘Maffia’ (Mafia). Besides that, she enjoys calm walks in Estonian forests, bogs, and at the seaside.