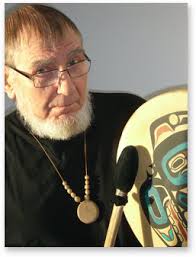 Conductor Tõnu Kaljuste and director Peeter Jalakas continue the cycle of grand pieces based on the music of Veljo Tormis with the joint musical production of 'Nativity Words' by Von Krahl Theatre, Nargen Opera and Nargenfestival.

'Nativity Words' has been created as the beginning of the mythical time cycle which at the same time marks its closing with the memorable for the audience and Estonian culture history 'Estonian ballads'(2004), 'Estonian women's songs'(2006) and 'Estonian men's songs'(2008) as the background.

Nativity Words blends archaic mind patterns with technologically digital treatment of the world, synthesizes mythology and futurism and reconciles sacral perception with the spirit of idealizing  the contemporary world's novelty.

The production retains the rustic content but dresses Veljo Tormis up in digital creased trousers and has him to sit in the yet uninvented vessel.

The performance rows through such works of Veljo Tormis as 'Creation of the World' from Izhorian epic, cantata 'Nativity Words', 'Kalevala's 17th rune song', 'Said Lembitu', Etude with Juhan Viiding. 'They sing on the ship'

The production is dedicated to the 85th anniversary of Veljo Tormis.

Tickets are on sale in Von Krahl ticket selling system www.vonkrahl.ee/piletid and Von Krahl Cafe (Rataskaevu Street 10, Tallinn) from 4 May 2015.