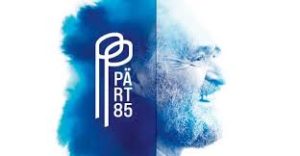 Arvo Pärt and Tõnu Kõrvits are two very different music creators who appreciate and revere each other's work. Pärt's works have been touched by Tõnu Kõrvits more than once when he has arranged his senior colleague's chamber works for an orchestra. His “Vater unser” for a mixed choir, piano and strings has already become a part of the permanent repertoir in its choir and orchestra version. “Cecilia, vergine romana”, originally created for a choir and a symphony orchestra, sounds for the first time in an entirely different, more chamberlike style, arranged by Tõnis Kõrvits, Tõnu Kõrvits's father. Side by side with Pärt's music will sound Tõnu Kõrvits's latest creation of last year “Sei la luce e il mattino”.

Tickets sale starts in May 2020

Nargenfestival celebrates Arvo Pärt's 85th birthday with the new, and never heard in Estonia before, version of the composer's several pieces arranged by himself and others. At the opening concert will sound a new version of the work of the early days of tintinnabuli style “If Bach Had Been a Beekeeper …” performed by Estonian National Symphony Orchestra. Arranger Tõnis Kõrvits has given a more chamberlike sound to “Cecilia, vergine romana”, a work originally written for a choir and a symphony orchestra. Another part of the festival includes the new arrangements from Raschèr Saxophone Quartet (Germany), who celebrated their 50th anniversary last year. The festival's artistic director Tõnu Kaljuste with Tallinn Chamber Orchestra and British violin soloists Hugo Ticciati and Priya Mitchell will bring to the audience's attention thrilling juxtapositions of Arvo Pärt's and Benjamin Britten's creative works. In addition to that, the composer's pieces will be placed side by side with Tõnu Kõrvits's latest piece by Estonian Philharmonic Chamber Choir and Tallinn Chamber Orchestra. The intertwining of Pärt's and Kreek's choral works will be performed by the ensemble Vox Clamantis conducted by Jaan-Eik Tulve. The anniversary season's highlight will be the traditional Arvo Pärt's birthday concert of the composer's pieces with a soprano soloist, two organs, two choirs and an orchestra