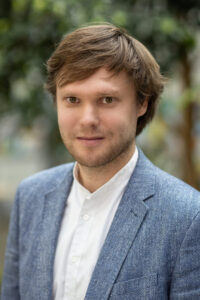 The young Estonian composer and conductor Pärt Uusberg and the Estonian Philharmonic Chamber Choir will tour Estonian churches with “Missa Tagore”, a concert of sacred music in December. The conductor has picked for the programme music that is close to his heart and sweeps a wide tonal palette ranging from tender and fragile to deep expressive currents.

The main piece in the programme is Uusberg’s beautiful “Missa Tagore” (2017) that entwines two worlds – the traditional mass text and “On the Seashore”, a poem by the Indian mystic Rabindranath Tagore, where the choir will be joined by a harp and a cello. Pärt Uusberg: “I’ve wanted to hear a professional choir sing “Missa Tagore” ever since I wrote it. I hope that the programme will bring out the unique sound of the Estonian Philharmonic Chamber Choir in the best possible way and fit well in the beginning of December when we still have one foot in the autumn and its Season of the Soul but are already starting to wait for Christmas.”

The truly special Advent atmosphere is complemented by a cappella gems, majestic motets of the renowned Romantic Anton Bruckner and Edward Elgar’s “Lux aeterna”, a piece of unearthly beauty.

Pärt Uusberg’s concerts are the special prize that he won at the 7th National Young Conductors’ Competition of Estonia.