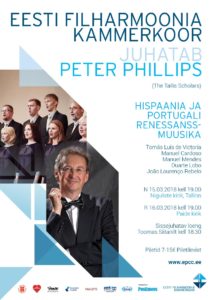 Peter Phillips: The idea behind this programme is to link the music of the greatest Spanish High Renaissance composer – Tomás Luis de Victoria – with the compositions of his leading Portuguese colleagues. It is widely acknowledged that Victoria was a major influence on the school of musicians who flourished in and around the Portuguese cathedral city of Évora; and we will showcase four of them. Their music is framed by two masterworks by Victoria: a double choir Magnificat, and his peerless 6-voice Requiem Mass, which takes up the whole of the second half. This must stand as one of the most moving compositions for unaccompanied choir in the whole repertory.

Broadcasting by the Estonian Classic Radio on 15 March at St Nicholas’ Church, Tallinn.