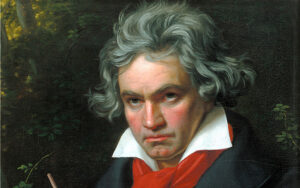 ‘Grand final’, ERSO’s final concert of the season, will sum up the season dedicated to the 250th birthday of Beethoven in a spectacular way, and we very much hope that it will also mark the end of the difficult and challenging period of restrictions.

Olari Elts, the Chief Conductor and Artistic Director of ERSO, will conduct Beethoven’s Symphony No. 9 – a summary of the work of the grand master which was simultaneously the powerful end note of his glorious development and the piece showing the way into the new era, Romanticism. The finale of the symphony is an ode to joy and brotherhood (lyrics by Friedrich Schiller) performed by soloists and a choir, which reflects the endless faith and hope of humanity for a better tomorrow. However, it reminds us that we have to take responsibility for our actions:

Endure bravely, millions!
Endure for the better world!
Up beyond the starry firmament
a great god will reward.
Against gods you can’t retaliate,
it’s nice to be as them.
Grief and poverty shall come forward
to rejoice with the happy ones.
Grudge and revenge be forgotten,
our deadly enemy be forgiven.
No tear shall force him,
no remorse may gnaw on him.