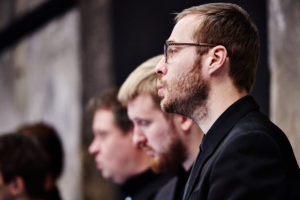 CYRILLUS KREEK
The Psalms of David – Blessed Is the Man, Psalm No 104

The programme features crème de la crème of the choral music by great Estonian composers of the last century as well as the present day. The programme opens with the music by the world-famous Estonian Arvo Pärt (b. 1935), whose works mesmerise people all over the world with the beauty of sound and the profundity of message. The EPCC has been invited to perform his music at many famous festivals and venues and has recorded his works for ECM and Harmonia Mundi, resulting in two Grammy Awards.
Another grand old man of the Estonian music, Veljo Tormis (1930–2017), has composed almost exclusively for the voice and the most essential part of his oeuvre has been connected with ancient folk songs of Estonians and other Finnic nations.
Estonian folk music was a source of inspiration also for Cyrillus Kreek (1889–1962), who arranged hundreds of secular and sacred folk tunes which attract large audiences with its simplicity and natural beauty.
The works by Galina Grigorjeva (b. 1962) have deserved appreciation for their remarkably subtle and animated melodic style. Her music is tightly linked to Slavonic sacred music, but also to early European polyphony. Her works have received already recognition and awards both in Estonia and abroad.

The concert is organised by Lundström Arts Management in cooperation with the Dublin National Concert Hall.