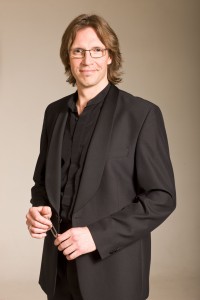 EPCC starts a series "Chief Conductors ("Peadirigendid) to celebrate the choir's 35th anniversary. During the series EPCC will be conducted by its four chief conductors starting from the founder of the choir Tõnu Kaljuste, followed by Paul Hillier, Daniel Reuss and the current artistic leader Kaspars Putniņš.
Choir’s current conductor Kaspars Putninš will start the series. Putninš is certainly among the most acknowledged choir conductors of our time in international concert arena. He is regularly conducting the top choirs of Europe, in addition to being the principal conductor of EPCC he is also the permanent conductor of Tenso Europe Chamber Choir and Latvian Radio Choir.
In Putninš' set, a new musical piece by Galina Grigorjeva is surrounded by two grandiose choir compositions. Sofia Gubaidulina has created a majestic and passionate glorification of the universe to the text of “The Canticle of the Sun” by Francis of Assisi; the brilliant contemporary music interpreter Leho Karin will play the cello solo part.

The “Mass for Double Choir” by Frank Martin that was written in the year 1922 is considered to be one of the most effectual mass music pieces of our time.

In cooperation with Eesti Kontsert