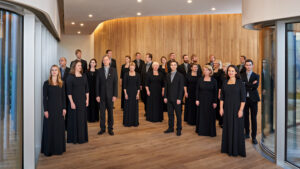 Eyes of the Beholder

Alisson Kruusmaa (*1992)
Under the Evening Sky for chamber choir and symphony orchestra (2020, premiere)

The winner of the new music award “LHV Au-tasu 2021” will be announced at the concert.

Li of the online concert: Eyes of the Beholder

Night Frost (2020, premiere). Every year there are autumn and spring days blessed with sunshine and the world seems golden and safe, but at night the temperature falls below zero degrees C0. Much of what is blossoming, growing or sprouting is destroyed by night frost. It leaves behind blackened fruit, shafts ruined by frozen sap crystals and withered leaves. The spring night frost destroys the burgeoning buds and plants that have not yet taken root. At the bottoms of ponds, frogs burrow further into the mud to find shelter. But what is destruction on one level, is beauty and joy on another. The frozen blossoms and leaves offers an opportunity to admire time standing still, and frozen fruit is also sweeter. (Malle Maltis)

Sic! (2020) is a piece for a symphony orchestra akin to an overture. The Latin title has many meanings, including ‘so’, ‘just as’, or ‘thus’ but it may also be a simple confirmation. Sic! is also an adverb that may be added in brackets when one wants to emphasize that the preceding text has been quoted exactly or needs special attention. Thus, I resolutely support the negation of post-truth (sic!). (Kristjan Kõrver).

Home (2020, premiere). It somehow turned out that the text I picked out for this piece are all directly or indirectly related to the topic of home. (Evelin Seppar)

Under the Evening Sky (2020, premiere) for chamber choir and symphony orchestra is based on Marie Under’s poem by the same title. This is a reflection or prayer that mirrors the rippling glimmer of the internal and external worlds and the pursuit of light and beauty (Alisson Kruusmaa).

Reception, Intermediation for two oboes and singing bowls (2019, premiere) depicts an environment created by monologue, dialogue or multilogue or a completely wordless, any kind of communication – a room where the energies created by communication have taken on independent lives. This piece consists of three five-sentence cycles. (Mariliis Valkonen)

“Change” portrays our need to be understood and heard by others. The first part underlines a theme of togetherness and understanding among the speakers. However, the second part dismantles this unity and focuses on a newly emerged leader who deals with being constantly interrupted by becoming louder and louder. Another “revolution” is introduced in the third part where “everybody is equal” turns into chaos. Out of that destruction, the fourth part advances towards one truth which finally is again reversed by bringing out a new, unheard and brave theme that overtakes everybody in an infectious manner. (Jievaras Jasinskis) In 2020 Jievaras piece “Change” for symphony orchestra won II place and special prize as best Lithuanian composition in an international competition “Future Symphony”.

Crossing The term ‘crossing’ comes from the literary critic Harold Bloom who uses the term to denote rhetorical disjunctions. But it is also a search for the Emersonian crossing that Bloom traces in Wallace Stevens’s Snow Man. Bloom argues that Stevens transports to the Emersonian bare place after line 12 of The Snow Man:

One must have a mind of winter
To regard the frost and the boughs
Of the pine-trees crusted with snow;
And have been cold a long time
To behold the junipers shagged with ice,
The spruces rough in the distant glitter
Of the January sun; and not to think
Of any misery in the sound of the wind,
In the sound of a few leaves,
Which is the sound of the land
Full of the same wind
That is blowing in the same bare place
For the listener, who listens in the snow,
And, nothing himself, beholds
Nothing that is not there and the nothing that is.

Bloom thinks we are transported to Emerson’s famous transparent eye-ball passage: “There I feel that nothing can befall me in life, – no disgrace, no calamity, (leaving me my eyes,) which nature cannot repair. Standing on the bare ground, — my head bathed by the blithe air and uplifted into infinite space, — all mean egotism vanishes. I become a transparent eye-ball. I am nothing. I see all. The currents of the Universal Being circulate through me; I am part or particle of God.”

Can temporal ruptures transport us to other mental or physical spaces?

Crossing was commissioned by Aspen Music Festival and premiered in 2018 by Aspen Philharmonic Orchestra and conductor Patrick Summers: since then the work has undergone several revisions and has been performed by Sarasota Symphony (conductor Christopher Rountree) and later received performances by the Atlanta Symphony Orchestra with maestro Robert Spano. (Krists Auznieks)