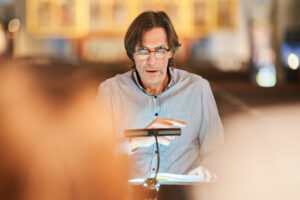 The music was recorded with the participation of Jens Braun, the renowned sound engineer. Heli Jürgenson was the chorus master and the CD was released by BIS Records in June this year.

Alfred Schnittke’s Choir Concerto (1984/85) is one of the most powerful a cappella choral masterpieces. It is based on prayer texts from the Book of Lamentations by the 10th century Armenian poet Grigor Narekatsi or St. Gregory of Narek, where a soul filled with penitence and a yearning for purity has a heart-to-heart conversation with God. Kaspars Putniņš coupled Schnittke’s piece with Pärt’s Sieben Magnificat-Antiphonen (1988) that consists of seven antiphons with a magnificat (Song of Mary), sung at Roman Catholic vespers on the seven days leading up to Christmas Eve.

The recording session took place at the St Nicholas Church in Tallinn from 27 to 31 January 2020.

The Estonian Philharmonic Chamber Choir and Kaspars Putniņš have had years of fruitful collaboration with BIS Records. The same CD recently earned the Diapason d’Or in October, and their previous collaboration, also with music by Schnittke and Pärt, won the prestigious Gramophone Award in 2018. BIS Records will soon release the next CDs of the Estonian Philharmonic Chamber Choir – Rachmaninoff’s Liturgy of St. John Chrysostom (op 31) and a CD with music of the Estonian composer Ülo Krigul.

Records of the Estonian Philharmonic Chamber Choir have won the GRAMMY award twice – for Arvo Pärt. Da Pacem (Harmonia Mundi) recorded with Paul Hillier in 2007 and for Arvo Pärt. Adam’s Lament (ECM) with Tõnu Kaljuste in 2014. The choir’s recordings have received a total of 15 Grammy nominations in various categories. The choir has released almost 80 recordings with renowned record companies such as  ECM, Harmonia Mundi, Virgin Classics, Carus, Ondine, BIS and others, and many of the recordings have won other awards including Diapason d’Or, Preis der Deutschen Schallplattenkritik, Danish Music Award, de Choc de l’Année Classica, Best Estonian Classical Album of the Year, recognition from the Classica magazine and others. The choir’s recordings have ranked among the Billboard’s top ten a number of times. The BBC music magazine Classical Music included the Estonian Philharmonic Chamber Choir among the world’s ten best choirs in 2020.

The next concerts of the Estonian Philharmonic Chamber Choir will be in Estonia, in Viljandi, Tallinn, Paide and Haapsalu from 8 to 11 December, with the programme  Missa Tagore conducted by Pärt Uusberg.