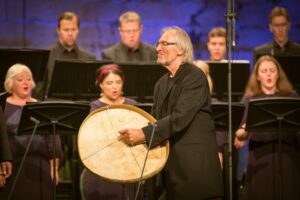 Tõnu Kaljuste has been announced as the Artistic Director and Principal Conductor of the Estonian Philharmonic Chamber Choir from 1 August. His first concerts as Principal Conductor will celebrate the 91st birth anniversary of Veljo Tormis, under the title On the Wings of Tormis: Estonian Calendar Songs, and will take place in Tallinn and Viljandi on 7 and 8 August.

Tõnu Kaljuste founded the Estonian Philharmonic Chamber Choir (EPCC) in 1981 with singers of the chamber choir Ellerhein. He was the choir’s Artistic Director and Principal Conductor for 20 years, moulding it into a highly professional ensemble with a unique signature sound and decades-long international reputation as Estonia’s treasured musical ambassador. After 20 years Kaljuste is returning as Principal Conductor in the 2021-2022 season when the EPCC celebrates its 40th birthday.

Tõnu Kaljuste has said that he would like to freshen the choir’s concert programmes: „I’d like to perform valuable and timeless repertoire.“ Since Kaljuste is Artistic Director of both the Estonian Philharmonic Chamber Choir and the Tallinn Chamber Orchestra (TCO) he is planning to include both in several concerts. „But there’s of course a lot of excellent vocal and instrumental music that we will perform separately,“ he says.

Esper Linnamägi, Managing Director of the EPCC says that Tõnu Kaljuste has been encouraging and fostering the choir’s development ever since he founded it, including the time when he was not the Principal Conductor. „His enormous experience and clear vision will turn a new page in Estonian musical culture.”

Tõnu Kaljuste is one of the pathfinders of Estonian professional choral culture and one of the creators of Estonia’s world renown as a top-quality land of music. He has spearheaded collaborations with the composers Veljo Tormis and Arvo Pärt that have shaped musical history. He has presented the music of Tormis and Pärt across the world and taken the EPCC and the TCO to leading concert halls such as Carnegie Hall in New York City, the Kennedy Centre in Washington, Sydney Opera House, Philharmonie de Paris, Konzerthaus Berlin and others. His most historic achievement to date is the Grammy for Best Choral Performance for the Arvo Pärt album Adam’s Lament in 2014. His recordings have had several Grammy nominations and won several other prestigious prizes such as the Cannes Classical Award (1999), Diapason d’Or (2000), Edison Musical Award (2000) and Classic BRIT Award (2003). He has recorded for the ECM Records, Virgin Classic, BIS and Caprice Records labels.

Tõnu Kaljuste is the founder of the Tallinn Chamber Orchestra (1993) and since autumn 2019 once again its Principal Conductor and Artistic Director. He served as Professor and Chair of the Conducting Faculty of the Estonian Academy of Music and Theatre from 2010 to 2020. Kaljuste has also been the Principal Conductor of the Netherlands Chamber Choir and the Swedish Radio Choir. Kaljuste has served as Artistic Director of Nargen Opera, the project theatre that he launched, since 2004 and led Nargenfestival, a notable event in Estonia’s music calendar, since 2006.

Tõnu Kaljuste and the Estonian Philharmonic Chamber Choir present the concert Estonian Calendar Songs at the festival On the Wings of Tormis
on 7 August at 19 at the Grand Hall of the Estonian Academy of Music and Theatre in Tallinn and
on 8 August at 18 at the Estonian Traditional Music Center in Viljandi.

The concerts are organised in collaboration with Nargenfestival.