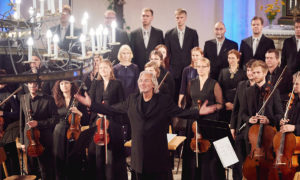 Estonian Philharmonic Chamber Choir and Tallinn Chamber Orchestra celebrate 100 years of the Republic of Estonia with five concerts in USA.

The Estonian Philharmonic Chamber Choir and the Tallinn Chamber Orchestra with their founding conductor Tõnu Kaljuste leave for a tour in the United States. Altogether five concerts will be given in the magnificent concert halls both on the East and West coast to celebrate Republic of Estonia 100 years.

On November 11, the concert at New York Troy Savings Bank Music Hall the music by Johann Sebastian Bach and Arvo Pärt will be performed.

The concert on November 12, at St. Ignatius Loyola Church in New York is dedicated to music by Arvo Pärt, the world’s most performed living composer. The Sound of the Sacred is a co-production with the Arvo Pärt Project at St. Vladimir’s Seminary.

On November 14, at Stanford University Bing Concert Hall, on November 16 in the UC Santa Barbara Campbell Hall and on November 17, at UCLA Royce Hall in Los Angeles the programme includes pieces by Estonians Arvo Pärt and Lepo Sumera, as well as Carlo Gesualdo and contemporary Australian composer Brett Dean.

The Estonian Philharmonic Chamber Choir is on its 16th and Tallinn Chamber Orchestra on the 8th tour in the USA. The tour is organised by New World Classics Agency, the partner for both the choir and the orchestra since 1995. During all these years Estonian musicians have introduced Estonian music at the most prestigious stages throughout North America, to a wide circle of fans, sold out concert halls and with glowing reviews.

Tallinn Chamber Orchestra was founded in 1993 by conductor Tõnu Kaljuste. In two decades it has become one of Estonia’s signature orchestras and a welcome guest performer on numerous stages in Europe and all over the world. TCO has gained regard for its artistically integral programmes, style-sensitive play and mastery of interpretation, TCO’s musicians are highly rated string players, who also regularly perform as soloists and chamber musicians. Since autumn 2013 the chief conductor of TCO is Risto Joost.