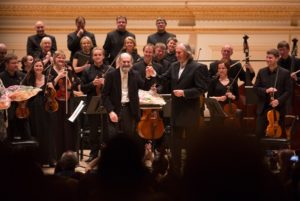 On May 7th, the concert with Arvo Pärt’s music in Basilica of Saint Sabina, Rome, is celebrating the Centenary of the Republic of Estonia and the 5th Anniversary of Pope Francis’s election to the Pontificate. The performers are the Estonian Philharmonic Chamber Choir and the Tallinn Chamber Orchestra under Tõnu Kaljuste.

The idea of the concert was initiated in November last year at the award ceremony in the Vatican’s Apostolic Palace where Arvo Pärt was awarded the Ratzinger Prize by Pope Francis. The Ratzinger Prize has been also called as the Nobel Prize in Theology.

This huge recognition led to an idea to produce a concert with Arvo Pärt’s works Adam’s Lament, Cantus in Memory of Benjamin Britten, Salve Regina and Te Deum. The concert venue is a historical church on the Aventine Hill in Rome, the Basilica of Saint Sabina, which is meant to be the oldest extant Roman basilica in Rome that preserves its original colonnaded rectangular plan and architectural style.

Photo: The same cast – Arvo Pärt, Tõnu Kaljuste, the EPCC and the TCO on the stage of Carnegie Hall, New York, some years ago (author: Eleri Ever).