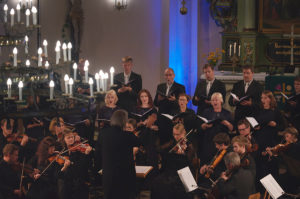 The first concerts will be given together with the Tallinn Chamber Orchestra under Risto Joost, performing Tõnu Kõrvits’s ‘Moorland Elegies’ at the Mito SettembreMusica Festival. Kõrvits is a rising star in Estonian contemporary music, more and more frequently performed in his native country as well as foreign countries. Two concerts in Milan and Turin will be followed by the cooperation with the Perugia Chamber Orchestra and the conductor Filippo Maria Bressan at the Festival Sagra Musicale Umbra. The next tour will take the choir to Helsinki to celebrate the 20th anniversary of the Helsinki Baroque Orchestra under the baton of Aapo Häkkinen. The last concert in September will be given in Moscow at the festival Spiegel im Spiegel dedicated to Arvo Pärt’s music.

MITO SettembreMusica Festival is hosted each year in autumn in two major cities of Italy, in Milan and Turin featuring 160 concerts of classical music with international soloist and ensembles from all over the world. The EPCC has appeared at this festival twice before, this time the choir is invited together with the Tallinn Chamber Orchestra and its chief conductor Risto Joost to perform Tõnu Kõrvits’s ‘Moorland Elegies’.
Tõnu Kõrvits’s works belong to the repertoire of the most important Estonian orchestras, choirs and artists. In recent years his music has been performed more and more outside Estonia. His composition ‘Moorland elegies’ (2015) is a choir cycle on the texts of Emily Brontë. The work was awarded the Cultural Prize of the Republic of Estonia in 2016. It has been recorded and released by Ondine this year and has received already international recognition.

The concert is produced by MITO SettembreMusica Festival

The concert is produced by Sagra Musicale Umbra Festival

The whole-evening composition ’Kanon pokajanen’ is a major a cappella work by Arvo Pärt. It was commissioned for the 750th anniversary of Cologne Cathedral and is dedicated to Tõnu Kaljuste and the Estonian Philharmonic Chamber Choir who where its first performers in 1998. The work was recorded for ECM and was nominated for Grammy Award twice. The EPCC has performed this work at many venues and festivals all over the world, including Metropolitan Museum of Art in New York, Vale of Glamorgan Festival, Wratislavia Cantans etc.

’Kanon pokajanen’ is based on the canon of repentance, which already appears in the earliest Church Slavonic manuscripts. Arvo Pärt discovered that text many years ago, when he became involved in the tradition of the Russian Orthodox Church and it made a profound impression on him. The composer has said that he had tried to use language as a point of departure. „I wanted the word to be able to find its own sound, to draw its own melodic line. The resulting music is entirely immersed in the particular character of Church Slavonic, a language used exclusively in ecclesiastical texts.”
​
The concert is produced by Festival Spiegel im Spiegel.