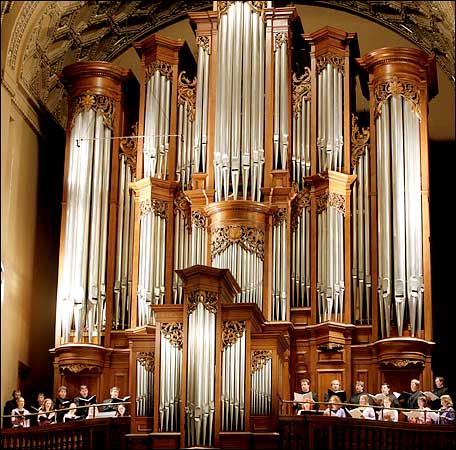 The program was devoted largely to music of Arvo Pärt, and on the strength of it, you might have wished for more. On the other hand, the mere four numbers from Rachmaninoff’s glorious Vespers whetted the appetite for the whole work. You might even have wished for more music by Cyrillus Kreek on the basis of his “Five Religious Folk Songs.”

It was that kind of concert, by Paul Hillier and the Estonian Philharmonic Chamber Choir at the Church of St. Ignatius Loyola on Sunday afternoon. The selections and the performances were so fine that they left you feeling like an ingrate, greedily hungry for more.

Happily, more is available on CD’s from Harmonia Mundi France, or will be. Several of the Pärt pieces performed on Sunday here and others are to be released in September. Mr. Hillier’s recording of the complete Rachmaninoff Vespers appeared last year.

What is always striking about Mr. Pärt’s music is its originality, and that was especially apparent here in “Dopo la Vittoria” (“After the Complete Victory,” 1997), to a text from Archbishop Philaret’s “History of Church Singers and Chants,” of 1902, which tells of the creation of hymns by St. Ambrose and St. Augustine. Straight, mundane historical narrative is presented in a joyous, jogging storytelling mode, and the quotations from the hymns themselves soar to transcendent heights.

Mr. Pärt’s originality was also apparent in two older organ works, deftly played by Christopher Bowers-Broadbent. “Annum per Annum” (1980), a charming set of variations, begins with a sustained swooning — ultimately, wheezing — decrescendo and ends with a briefer opposite: a triumphant swelling statement of D major.

Remarkably, Rachmaninoff’s Vespers, scarcely known in the West a few decades ago, has become almost standard repertory. Dennis Keene and the Voices of Ascension gave a superbly polished account of substantial excerpts at the Church of the Ascension less than a month ago, and the next night Stefan Parkman and the Academy Chamber Choir of Uppsala, Sweden, presented a grippingly theatrical performance of the whole work, also at St. Ignatius.

Mr. Hillier’s excerpts were just what you might expect from one of the finest choral conductors of the day with so wondrously talented a group of singers (27 strong). Whatever voices were heard individually were of soloist caliber, and Iris Oja, a mezzo-soprano, was superb in her extended solo, rendered with earth-motherly warmth.

The folkish vein of Kreek’s Estonian songs carried into an encore by Mart Saar, another Estonian: “Why Are You Weeping, Oak Tree?”