Sunday’s Great Performers concert by the Estonian Philharmonic Chamber Choir featured five of the master’s choral works from the past decade. Pärt’s “Salve Regina” opens with a lilting melody that wafts gracefully downward, moving from heaven to earth like the Virgin’s sweet mercy. High voices intone humanity’s childlike pleas to Mary; the choir’s words and sound take on a rapt hush when Jesus’ name is invoked.
Here and throughout the program, conductor Paul Hillier drew from the choir music-making of sublime and self-abnegating mastery. Faultless in matters of pitch, dynamics and tonal blend, the choristers never drew attention to their own virtuosity, instead remaining alert to the sense of wonder in Pärt’s works. Just as his music both exalts and melts away into its mystical texts, so did the choir sing with soulful, humble beauty.

The audience sat in meditative silence, holding its applause between Pärt’s works. The soft, voluptuous final note in “Littlemore Tractus” – evoking the “peace at the last” for which believers hope – hovered, vibrant yet immaterial, in the majestic gold and ochre interior of the Church of St. Ignatius Loyola.
Bouncy, glowing bursts of sound, almost Rossinian in jollity, gladdened the narrative portions of Pärt’s “Dopo la vittoria,” a cantata written for the 1,600th anniversary in 1997 of St. Ambrose’s death. In the “Anthem of St. John the Baptist,” receiving its New York premiere, the choir evoked a swell of light as Jesus approached the Baptist and a crushing radiance for the Holy Spirit’s manifestation. The quiet harmonies that opened “Nunc dimittis” first splayed and then folded in on themselves. A quiet “Amen” brought the canticle to an end, commingling high tones with the basses’ stinging buzz.

“Trivium” sets a single tone (the note D) in a prism, exploring its shifting colors and implications, in sonorities ranging from whispers to crashing, grinding swoops. “Annum per annum,” a set of variations, is bracketed by an ear-splitting chord that gradually fades to the faint whirr of the organ mechanism, only to make the return journey from the hiss of breath to cosmic vastness at work’s end.

In the “Five Religious Folk Songs” by Estonian composer Cyrillus Kreek, the choir created an uncanny sense of homely, familiar dialogue with the divine. Selections from Rachmaninoff’s “All-Night Vigil” perhaps wanted a grittier sound, but the choir nonetheless sang with riveting eloquence, summoning tones of searing, inhuman urgency for the angels’ proclamation of Jesus’ resurrection and glory. 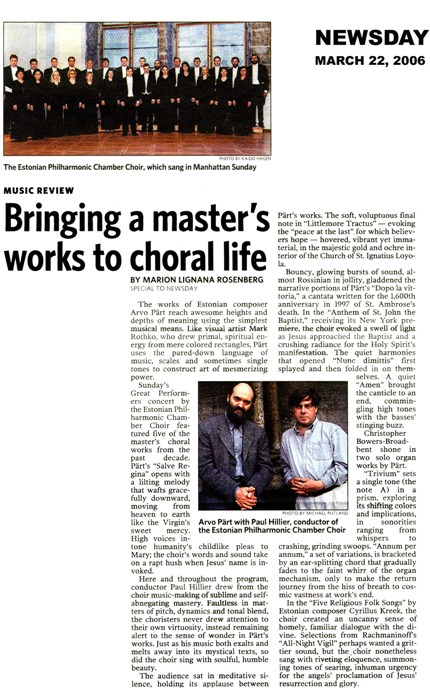