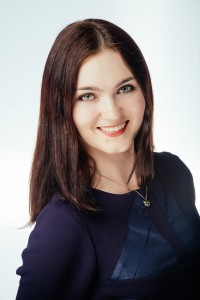 Karolis Kaljuste (soprano) was born and grew up in Tartu, the second biggest city in Estonia. Her first noteworthy contact with music was while attending music class at the Karlova School in Tartu. She also studied piano and attended singing classes at the 1st Music School in Tartu. Her singing teacher realised her potential as an opera singer quite early on and subsequently recommended her to continue following that path. As a result of this endorsement, she began studying at the Estonian Academy of Music and Theatre and later received a bachelor’s degree under Nadia Kurem. Currently she is studying for a master’s degree.

Karolis bolstered her education by attending various master classes by the likes of Eva Märtson, Rebecca Berg, Alexander Schmalcz and Kirsten Buhl Møller. She has attended opera courses for young talents in Helsinki, Gothenburg and Riga, and in 2012 Karolis was awarded the Naan Põld Scholarship of Young Singers.

Karolis has sung in some performances of the Heino Eller Music School and the opera studio of the Estonian Academy of Music and Theatre, including the title role in Kálmán’s operetta ‘Die Csárdásfürstin‘, Susanna in Mozart’s ’Le Nozze di Figaro’ and Lucy in Menotti’s ’Il Telefono’. She joined the Estonian Philharmonic Chamber Choir in 2014.

Karolis is fascinated with choral singing, specifically about the power and beauty of harmonizing voices and how it can create such beautiful sounds and harmonies, more than a single voice is capable of.