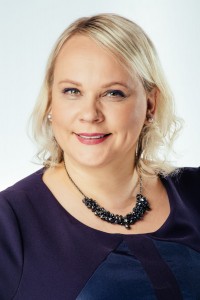 Karin Salumäe (alto) grew up in Tori, Pärnumaa. Her first contact with music was when she studied piano at the Mihkel Lüdig Vändra Music School. After graduating from Vändra Secondary School she went to Tallinn University, from which she graduated as a choir conductor in 1993 under Merike Aarma. During her studies Karin was already making progress in the musical world by singing in the Estonian Radio Choir and the Eesti Projekt chamber choir. This motivated her to audition for the Estonian Philharmonic Chamber Choir, and since the 1995/1996 season she has been a full member of the choir.

Professor Allan Vurma has been her vocal coach for many years and her collaboration with him continues to this day. In addition to singing in the EPCC, Karin is in fact a vocal coach for the Tallinn University female choir and the leader of the Vox Nova ensemble.

Karin considers Tõnu Kaljuste, a known conductor, as the person who has most influenced her path. His musical instincts and uncanny ability to convey the meaning of each word with the help of sound is brilliant and enchanting. Karin feels privileged to witness first-hand the creative process of the impressive duo, Pärt-Kaljuste and Tormis-Kaljuste.

Additionally, Karin appreciates every minute with her kids and family, loves going to the theatre, enjoys reading books, and working in her small but colourful garden.