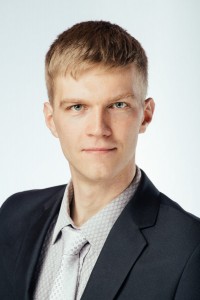 Kaarel Kukk (baritone) comes from Tartu, the second biggest city in Estonia. At the beginning he came to Tallinn to study architecture, but after short period at the Tallinn University of Technology and the Estonian Academy of Arts, he found singing to be his true calling. Following in his sister’s footsteps (Maarja Leemet was a former EPCC singer), Kaarel joined the Estonian Academy of Music and Theatre. In 2013 he received a bachelor’s degree in singing, and in 2016 received a master’s degree in pedagogy of singing. His tutors were Professor Mati Palm and Taavi Tampuu in Estonia, and Peeter Kooij’ and Eva Märtson abroad. Kaarel has taken part in the Savonlinna Opera Festival Choir three times and has sung some smaller operatic roles in children performances.

Kaarel has been a member of the Estonian Philharmonic Chamber Choir since 2014. His favourite work in the choir’s portfolio is Alfred Schnittke’s Concerto for Mixed Chorus, but also appreciates works by Galina Grigorjeva, Tõnu Kõrvits and J. S. Bach.