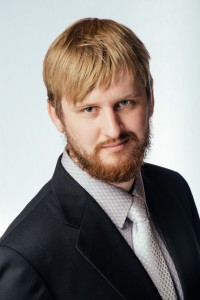 Joosep Trumm (tenor) was born in 1989 in Paide but grew up in Tartu. His roots however, are in Võrumaa, deep in the hills of Haanja. Joosep has studied saxophone and piano in Tartu 1st Music School, classical singing in Heino Eller Tartu Music School and music pedagogy in the Estonian Academy of Music and Theatre. Joosep has been a full member of the Estonian Philharmonic Chamber Choir since 2016, but actually took part in many of the choir’s performances in the several years before he joined. What fascinates him most about the choir is its vast and diverse repertoire and enjoying the creation of music with a group of extremely talented musicians. For him, the most memorable of the choir’s performances is the recital of the Concerto for Choir by Alfred Schnittke, an opus, which had in fact been one of Joosep’s absolute favourites for years already.

Aside from the EPCC, Joosep is involved with two male choirs in Tartu and Võru where he acts as an accompanist and assistant conductor. He is also a freelance translator, translating subtitles from English into Estonian. Joosep has enjoyed some success as a composer; in 2013 his choral piece “Valge roosi sõnad” (’Words of the White Rose’) was recorded by the chamber choir Head Ööd, Vend (‘Good Night, Brother’) and in 2016 his first author concert “Matsalu kauged Taevad” (‘The Remote Skies of Matsalu’) was performed in both Tallinn and Tartu.

In his spare time, Joosep loves nothing more than wandering around in muddy swamps and dense bushes. He hikes regularly in Estonia, through its neighbouring countries, and also in places like the Alps, Iceland, Georgia and Lapland. Accounts of some of his exploits can be found here (in Estonian): http://normaalnekoikteevadnii.blogspot.com  A small chunk of his creative output as a composer can be observed here: https://soundcloud.com/joosep-trumm/