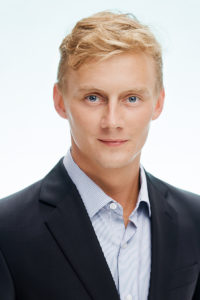 Benjamin Theophilus Martin Kirk (baritone) is not Estonian. Born to missionary parents, Benjamin was Head Chorister at Ripon Cathedral in North Yorkshire, England, and visited his parents at home in Brazil during (boarding) school holidays, three times a year from the age of 8.
Benjamin studied Piano, Voice, and Composition in the Junior Department of the Royal College of Music in London until he was 18, and played French horn in the National Youth Wind Ensemble. In 2011, he moved to Estonia to begin a Bachelor of Arts degree in Choral Conducting, studying with Tõnu Kaljuste.
Benjamin is a graduate of the Royal Academy of Music in London and recently completed his third Master’s degree, in Orchestral Conducting, at the Estonian Academy of Music under Paul Mägi.
As a soloist Benjamin has sung Peter Maxwell Davies’ 8 Songs for a Mad King in Joensuu in Finland, and the lead role of Karl Ernst von Baer  in Dominy Clements’ opera Der Nordische Baer in 2017.
Benjamin is the Chief Conductor and Artistic Director of Tallinn Chamber Choir, and worked as choirmaster with Voces Musicales from 2017−2018. He is also the Principal Conductor of the Old Blues Chamber Orchestra in London, and has been invited to work with a number of Estonian choirs, including Tartu University Female Choir, and Segakoor HUIK!
In his spare time, Benjamin is an avid football fan, and supports both Gremio (Brazil), and Manchester United (England). He also loves stand-up comedy from Doug Stanhope, novels by Hermann Hesse, poetry from John Keats, and playing chess with Benjamin’s older brother, Barnabas.