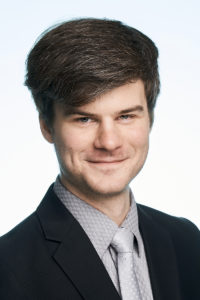 Andre Tõnnis (baritone) comes from Tallinn. The first choir he sang in was the mixed choir of Tallinn German Gymnasium. Whilst he was still a student, he was invited to join the Mixed Choir of Estonian Pupils. During his history studies at the University of Tartu, Andre sang in the chamber choir of the university. After he returned to Tallinn, he joined the chamber choirs Head Ööd, Vend (Good Night, Brother) and Collegium Musicale. In addition, he has participated in several project choirs, including the European Choir Academy.

The more Andre sang in choirs, the more his hobby turned into his main activity. Spurred on by the desire to become a better singer, he enrolled at the Georg Ots Tallinn Music School in 2017 to study classical singing. His teacher was Eha Pärg. On her recommendation Andre came to the auditions of the Estonian Philharmonic Chamber choir. One of the first concerts for him as a member of the chamber choir was Johann Sebastian Bach’s “Christmas Oratorio”. It was whilst listening to the very same piece of music some years earlier that Andre first got the idea to develop himself as a singer. He was that enthralled by the alto soloist’s performance. In addition to the aforementioned work, his favourite pieces of music include Bach’s “St John Passion”, Erkki-Sven Tüür’s “Missa Brevis”, Arvo Pärt’s “Which Was the Son of…” and Veljo Tormis’ “Forgotten Peoples”.

Albeit he never completed his history studies, history has remained close to Andre’s heart. He is also a fan of heavy metal and his favourite sports is handball, which he used to play at school. Individually Andre has not won a sports- or singing competition. His best results have always come from cooperation as a team or in a choir.