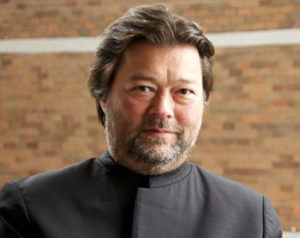 Multitalent Joseph Swensen is a wonderful combination of a conductor, a violinist, a composer, and a teacher. In addition to his active work as a musician, his heart also lies in promoting and developing the role of music in supporting the all-round development of children.

Joseph Swensen is the principal conductor at the Wroclaw NFM Leopoldinum Orchestra and a principal guest conductor among many reputable orchestras, but he is most closely tied to the City of Granada Orquestra. He debuted for the ENSO in spring 2017, winning the hearts of both the orchestra and the audience.

The concert will start with the premiere of a piece by Märt-Matis Lill and also include two beloved opuses: together with the Estonian Philharmonic Chamber Choir and soloists, Mozart’s Coronation Mass and Bruckner’s Symphony No. 4 (Romantic) will be performed.

The concert is produced by the Estonian National Symphony Orchestra.