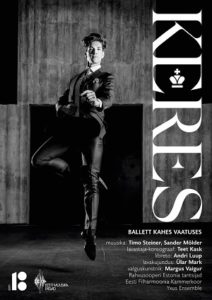 In the spotlight of the ballet stands Paul Keres, the master of Estonian chess, who holds a dignified status on the global chess arena and who has both enjoyed the glory of a national hero and carried on his shoulders the tragedy of the country and its people. As an active chess player he encountered the loss of a homeland, a failed attempt to emigrate, endless suspicion from the Soviet authorities and the obstacles set by the system to a possible world championship.

MUSIC
The inspiration for the composition originates from the rhythm and tempo of chess as an academic sport, the gracefulness of the chessmen, the minimalism of black and white, the immense contrast and tension, and on the sideline Keres’ involvement in the turbulent world politics. There occurs an inspiring parallel between the sense of time in music and chess: actual time vs perceived time.

MUSICIANS IN A BOX
Ülar Mark the architect designed six boxes on the stage, frames for six musicians – six instruments, six chessmen. Boxes are repressing, living in a box-shaped society makes a person’s actions predictable. As to sounds, boxes make it possible to approach every swing of the bow or the air individually, focus on microscopic nuances, create new syntheses and combinations.