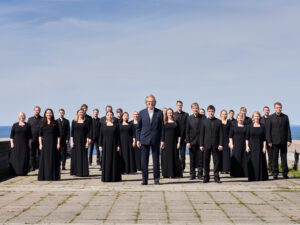 Music at Oxford is honoured to welcome the Grammy award-winning Estonian Philharmonic Chamber Choir (EPCC) to our festival and to Oxford. The choir celebrated its 40th anniversary last year and is ‘one of the 10 best choirs in the world’ (BBC Music Magazine).

The programme Da pacem Domine (Give us peace) was performed by EPCC under Tõnu Kaljuste for the first time this year on 7 May, in the Estonian- Russian border city Narva.

The concert was part of the Tallinn/Narva Music Week and made an important statement about the war in Ukraine. In the Russian Orthodox Church Issanda Ülestõusmise peakirik – which opened its doors for the first time for the public concert – the audience experienced, through the music of Arvo Pärt, a moment of peace as a prayer or hope for the future. By bringing this programme to Oxford as the opening concert of our festival, EPCC continues to shine a light on the need for peace.

In cooperation with Estonian Embassy in London