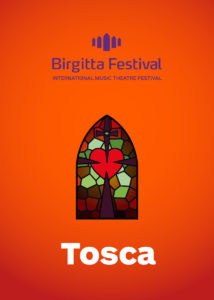 "Tosca" is an Italian composer Giacomo Puccini’s opera in three acts, written by Luigi Illica and Giuseppe Giacosa, based on Victorien Sardou’s drama "La Tosca". It premiered in Rome on 14th January 1900 in Teatro Costanzi. Tosca is one of the most played operas in the world.

In 1800, Rome is under the fear that the republic will fall, and monarchists will seize power in the country. Scarpio, the pro-monarchist chief of the secret police Scarpia chases an escaped republican prisoner Angelotti, who finds refuge in a church where another republican Cavaradossi is hiding as well. Scarpia arrived to the church just as the men have escaped. His path crosses with Cavadossi’s lover Tosca, and demands his soldiers to follow her to Cavaradossi’s hiding place. They cannot find Angelotti but arrest Cavaradossi and torment him to make him reveal Angelotti’s hiding place. Scarpia makes Tosca to watch how Cavaradossi gets tormented, and finally she gives in and tells him where Angelotti is hiding. News arrive about Napoleon’s and republicans’ win over monarchists and Cavaradossi expresses his joy. Angry Scarpia condemns Cavaradossi to death. Tosca prays Scarpia to save her lover from death, and Scarpia agrees to give merci if Tosca agrees to spend a night with him. When Scarpia makes advances, Tosca grabs a gun, shoots and is then under the impression of having killed Scarpia. Scarpia pretends to be dead. Tosca believes that she and her lover are finally free, but her luck in soon shadowed by Cavaradossi’s execution. Before Scarpia’s soldiers get the chance to arrest Tosca she kills herself.

English Touring Opera (ETO) was founded in England in 1979 under the name of Opera 80. The name was changed to ETO in 1992. English Touring Opera’s mission is to bring quality opera to diverse locations, across the UK as well as Europe, which are not originally built for opera productions, and to audiences who ordinarily might not have the opportunity to enjoy high quality opera. From 2002, the head of ETO is James Conway, a highly acclaimed director in the UK, who came to ETO from Opera Theatre of Ireland. Also from 2002, the musical director of ETO is Michael Rosewell.